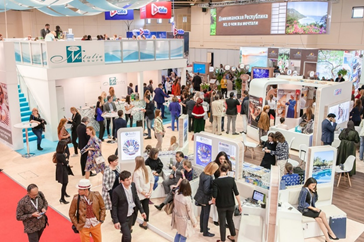 Moscow, Russia — Organizers of the OTDYKH Leisure Trade Fair are offering a range of unmissable B2B marketing events for exhibitors to partake in at the OTDYKH 2019 expo, which takes place this year, This comes at a time where live events are proven to be especially important for B2B professionals when it comes to increasing brand awareness and customer engagement. The scheduled events include B2B Speed Dating, where industry specialists will be granted the opportunity to have short, individual meetings, one after the other at exhibitors’ stands. This will be the perfect way to network with a large volume of specialists in a short space of time. Exhibitors will also benefit from roundtable meetings with Russian tour operators, co-organized by The Association of Tour Operators of Russia (ATOR), and a special sales-call service. Exhibitors are invited to deliver their own bespoke workshops, facilitated by OTDYKH, to a number of key players in Russian regions in order to explore business opportunities. And of course, one of the best ways to meet travel professionals from major Russian regions is through the Hosted Buyers Program.

OTDYKH’s digital support is also fully engaged in the distribution of information provided by exhibitors, disseminating exhibitor news, logos and press releases via various promotional channels. These include the OTDYKH website, partner websites, social media platforms and the expo newsletter which currently has over 63,000 recipients.

In another exciting update, the Komi Republic has been announced as a sponsor region. Representatives have purchased an exclusive 42m² stand and a sponsorship package. The Komi Republic lies to the west of the picturesque Ural Mountains and to the north-east of the East European Plain. It is perhaps best known for the Virgin Komi forests which is not only the largest virgin forest in Europe, but in 1995 became the first natural UNESCO World Heritage Site in Russia. Information on all of the regions’ top tourist attractions will be available at their exhibition stand.

This year marks the 25th anniversary of the OTDYKH Leisure Trade Fair, and over 600 countries and Russian regions will be participating in the 2019 expo. Companies and individuals from all over the world who operate in the travel and tourism industry will come together to explore the potential of the vast and ever-expanding Russian market.

OTDYKH International Russian Travel Market will be held on the 10th-12th of September 2019
Location: Expocentre Fairgrounds in Moscow, Russia.