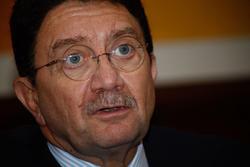 The importance of removing travel barriers to facilitate tourist flows was top of the agenda during the recent visit of UNWTO Secretary-General, Taleb Rifai, to Russia (Moscow, Russia, March 14, 2011).

The issue of travel barriers was among the key issues discussed by the UNWTO Secretary-General during his recent visit to Russia. Meeting with Deputy Prime Minister, Alexander Zhukov, Mr. Rifai praised the importance given to this question in the country. “I am extremely pleased to see that the critical issue of removing travel barriers such as complicated visa formalities and cross-border procedures in order to facilitate tourist flows is a priority within Russian tourism policy,” he said.

Furthermore, Mr. Rifai addressed the need to support the speedy return of tourism flows to North Africa and the Middle East while meeting with several Russian high representatives including the Chairman of the Council of Federation, the upper house of the Russian Parliament, Sergey Mironov; the Deputy Minister of Foreign Affairs, Gennady Gatilov; the Deputy Minister of Sport, Tourism, and Youth Affairs, NadezhdaNazina; as well as the Deputy Head of the Federal Agency for Tourism, AlexanderRadkov.

Discussions held during the visit included further tourism issues, namely the upcoming Winter Olympics (2014) and the FIFA World Cup (2018) to be held in Russia; UNWTO-Russia cooperation to advance tourism in the Russian regions; and UNWTO technical assistance in the development of cruise tourism in the Black Sea and Caspian Sea regions.

“Upcoming sporting mega-events will offer Russia unmatched global exposure and massive opportunities for nation branding and promotion,” said Mr. Rifai. “To ensure that these opportunities are harnessed responsibly, UNWTO and Russia will hold a series of joint seminars to share knowledge on the linkages between tourism and mega-events, focusing particularly on the legacy value of such events.”

The UNWTO Secretary-General was visiting Moscow to open the 6th edition of the International Tourism Fair in the tourism market and attend the seminar on "Effective Governance in Tourism Destination Development," jointly organized by UNWTO and the Russian Federation.

Russia registered over 22 million international tourist arrivals in 2010. Russia is currently one of the top ten most important outbound markets in the world and one of the fastest growing (up by over 20% in 2010).