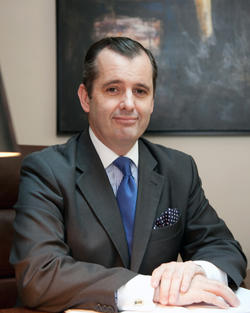 Eric has traveled extensively throughout his hotel career and has gained invaluable knowledge and experience through senior management positions with leading hotels such as the Hotel Port Palace in Monte Carlo, the Savoy Group’s Berkeley Hotel in London, and the Hotel La Samanna on the island of St. Martin in the Caribbean.

Eric graduated in hotel management from the School of Hotel Administration in Paris and has also received accreditation from Cornell University in New York, and the Institute of Hotel Management International in France.

«St. Petersburg presents a whole new set of opportunities to Eric. He has been with Corinthia for some time, and we now look forward to seeing him lead our team at Corinthia Hotel St. Petersburg," said the company’s Chief Operating Officer Liam Lambert.

Following extensive refurbishment and restructuring work, the luxury Corinthia Hotel St. Petersburg was with more bedrooms and more facilities under one roof than any other luxury hotel in the city. The hotel, together with grand properties on either side of it on the city’s main boulevard, was acquired as an operating hotel in 2002 by International Hotel Investments plc. (IHI).

IHI, which is the owner, developer, and operator of all Corinthia Hotels, has since invested a further Euro€100 million in the total refurbishment of the original hotel, complete with a new grand foyer, a new restaurant, and new bars. The adjoining buildings on either side of the hotel were demolished and carefully reconstructed with ornate facades matching their original splendor, rebuilt using traditional techniques. The hotel also has the city’s first grand ballroom in a  hotel.

The Corinthia Hotel brand is owned by International Hotel Investments plc., a  company in Malta, which also acquires, develops, and owns Corinthia Hotels worldwide. The management of the hotels is entrusted to a subsidiary company, CHI Hotels & Resorts Limited, which provides the full range of technical assistance and management services to hotel owners worldwide. CHI is the exclusive operator of the Corinthia brand, as well as, under license, the Wyndham and Ramada Plaza brands for Europe, Africa, and the Middle East.