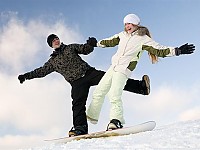 Russian skiers are the least likely to wear helmets but they prefer the most difficult ski routes. They tip generously and order expensive wine — a survey shows.

According to a survey by French company Temmos, managing a hotel chain in the French Alps, Russian tourists are among the most reckless skiers of all Europeans. Only 27% of them wear helmets on the slopes while 76% of them go for «red» routes that are the most difficult.

The amount of Russians skiing with helmets increased over the last three seasons only by 5%. This proportion is however quite different from the other European tourists who generally show a clear tendency to increase their skiing safety.

For example, 56% of French tourists wear helmets and about 70% of them prefer the red routes; among Germans — 63% of the skiers have helmets and 71% opt for red routes. Both nations have shown great progress over the past few years since the helmet use rates during the last three seasons increased among the French by 10% and among the Germans by 12%, reported Tourprom.ru.

Another part of the Temmos survey focused on the activities of European skiers. Russians and British tourists were the most active in terms of visits to clubs and parties when 36% of Russian tourists and 38% of British visitors went for a party or disco every day. Scandinavians on the other hand appeared to prefer quieter evenings — only 17% of them went to some disco or a party every day, while most of them preferred spending time in their hotel in a group of friends.

The last part of the survey dealt with money spending. The results show that the Russian tourists seem to be among the most generous — on average they gave tips of 8% of the bill while British and German guests tipped 6% and 5% respectively. Another interesting finding is that Russians preferred more expensive wines than other European visitors. On average, they were willing to pay about 18 EUR per bottle, compared to 16 and 15 EUR for the British and Germans, respectively.

The study was conducted over the past three winter seasons in five Temmos hotels located in the resorts of Val d’Isere, Les Trois Vallees, Chamonix and Les Arcs. The research combined surveys of 10,000 tourists and hotel staff.