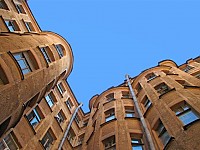 Rizzani de Eccher, an Italian developer announced his plans to invest one billion Euros to the construction of Russia Resorts of North Caucasus after he signed a Letter of Intent with the Resorts of Northern Caucasus which runs the regional tourist cluster.

The Italian construction company finds the investment in North Caucasus hotel project quite attractive considering the friendly tax holidays that are on offer. Actually, the real deal is that the Russian Government may exempt the investors of North Caucasus hotel projects from taxes on property for ten years and taxes on land for five years, as reported by Kommersant business daily. The deal gets even better when the Russian Ministry of Finance may offer up to a 70% refund of the capital invested in the projects.

Otherwise, the Russian government had its project launched to form a state of the art tourism cluster in 2010 in Northern Caucasus. This plan comprises of 5 new world class resorts with quality technical and resort service standards.

The overall value of the projects sums up to 451.4 billion rubles which includes 60 billion rubles from the federal budget funds. So far the Resorts of Northern Caucasus has signed 16 billion euros worth of contracts with the Korea Electric Power Corporation of South Korea, France’s Caisse des Depots et Consignations state bank and the China Dalian Wanda and China Ocean wide.

The designated area of the project’s construction covers a 2,500 square kilometer territory which should be able to accommodate a significant number of hotels that can host up to 83,500 tourists.

The Rizzani de Eccher one billion Euro investment can put up hotels with up to 10,000 hotel rooms. Stanislav Ivashkevich, the deputy development director of CBRE Russia Commercial real estate, said that the addition of hotel occupancy rates would be not worth more than 35% a year and the period may be more than 20 years.