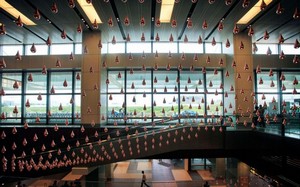 If a picture paints a thousand words, a sculpture could well generate a million views online. That’s the new world marketing phenomenon.

30 years after its launch, Terminal 1 at Changi Airport was due for a makeover — continuing its relentless drive for innovations to handle over 20 million passengers a year.

Terminal 1 at Changi Airport set a new benchmark when it launched 30 years ago, as the airport all other airports should look to.

With its relaunch in 2012, it sets out to establish its innovative transformation and wow the travelling crowd.

To be world’s leading air hub, it calls for a modern work of wonders. Changi T1 will have an iconic sculpture for the world to behold — combining technology, art and an engineering feat — that will leave travellers in awe.

Kinetic Rain is a modern arts showpiece, featuring the dance of a thousand copper raindrops in the air with precisely choreographed movements. Set right in the departure hall of Terminal 1, it was designed by Art+Com.

Set to create images of tropical showers, airplanes, and birds, Kinetic Rain constantly transforms into shapes that let your imagination take flight. The Kinetic Rain’s performances on film were captured in a campaign by Tribal DDB, which soon led to a sensation worldwide.

We began on Facebook with a short teaser clip with the promise of a new T1 at Changi. We then launch the new Terminal 1 website and the official Kinetic Rain film, including footages. A centerfold advertisement in The Straits Times brought the message to all Singaporeans.

On the Kinetic Rain information panel, we injected a QR code which enabled visitors to listen to an audio commentary, learning more about Kinetic Rain.

Kinetic Rain made the news on the national papers. The film Kinetic Rain became the most viral film in the history of Changi Airport. Within its first month of launch, it received over 500,000 views on video platforms YouTube/ Vimeo. It achieved over 50 pages of listing on Google Search.

Once again, Changi Airport has shown its innovative edge to be the world’s modern airport where the feeling is simply .

Join in the fun at www.changiairport.com/millionaire, and you could soon find that life imitates art.

The exhibition RECREATION / Leisure at booth number 3E701 Singapore Changi you can see the sculpture and other grandiose innovation known airport.

We are waiting for you at the show RECREATION / Leisure from 19 to 22 September at the «Crocus Expo»!