Latest news from the Dubai Department of Tourism and Commerce Marketing, the regular OTDYKH/Leisure exhibitor

ANANTARA DUBAI THE PALM RESORT & SPA to open in September 2013 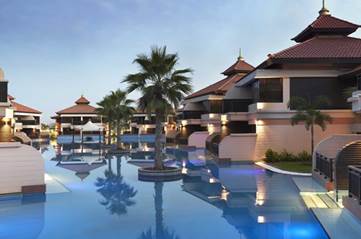 Anantara Dubai The Palm Resort & Spa, a new luxury hotel on The Palm Jumeirah will be opened on September 2013. The hotel is set amidst lush landscaping and offers a total of 293 guest rooms and 33 villas designed in modern Asian style.

Exciting new facilities consist of an Anantara Spa with 10 treatment rooms (will be open in November 2013), a private beach, 3 natural lagoons, water sports, a shoreline infinity pool, a fitness studio and tennis courts. The hotel features a sophisticated entertainment zone that can be used for different events, and 6 meeting rooms.

Anniversary OMEGA DUBAI DESERT CLASSIC to be held from January 27 to February 2, 2014 in Dubai

The 25th anniversary Omega Dubai Desert Classic will be held from January 27 to February 2, 2014 at the Emirates Golf Club’s Majlis Course. The top-two ranked players on the planet Tiger Woods and Rory McIlory will join an illustrious list of past champions which includes Mark O’Meara and Joe Maria Olazabal as they vie for a $2.5 million prize.

The ’Champions Challenge,’ an exclusive stroke-play event which see past champions contest for a $600,000 prize fund, will be the other major highlight of the festive week, providing fans a rare spectacle of golf. The ’Champions Challenge,’ which will be held on Tuesday, January 28, will be followed by the traditional pro am the following day before the main competition gets underway.

His Highness Shaikh Hamdan bin Mohammed bin Rashid Al Maktoum, Crown Prince of Dubai and Chairman of the Dubai Sports Council, has granted his official patronage for the Omega Dubai Desert Classic in a fitting recognition to the role played by the event in contributing to the Emirate’s status as a global centre of sporting excellence.

Yoga and wellbeing at Madinat Jumeirah

The Dubai resort Madinat Jumeirah is set to present its first Luxury Yoga and Wellbeing Retreat on 19 September.

The weekend includes a two-night stay at Madinat Jumeirah’s Arabian-inspired Dar Al Masyaf courtyard summer houses, a relaxing treatment at the Talise Spa, followed by yoga under the full moon on the resort’s beach. 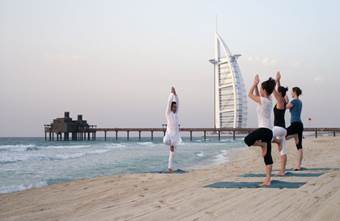 Over the course of the stay, guests will be guided through meditations and yoga sessions under the guidance of qualified instructors and practitioners. The retreat also includes cooking classes with wellness resort chef Gabi Kurz, lifestyle, nutrition and digestive wellness seminars, designed to help guests develop a greater awareness of overall wellbeing and discover inner balance. Guests are also invited to use Talise Spa’s facilities, which include sauna and steam room facilities, hot and cold plunge pools and an outdoor swimming pool.

The detailed information is available on .