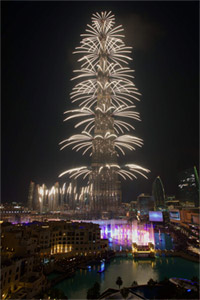 On 31 December, the skyline of Dubai will be lit up with a host of impressive fireworks displays which promise to place the city as one of the world’s premier locations in which to mark the end of 2013. The festivities will centre around the iconic landmarks of the city including Burj Khalifa, Burj Al Arab, The Palm Jumeirah and Atlantis the Palm.

Since its opening in 2010, the celebrations at Burj Khalifa, the world’s tallest building, have been shown around the world and this year will be no different, with the images joined by those of a spectacular show which will use the coastline of Dubai as the stage for a breathtaking display which will begin shortly before midnight and last for more than 20 minutes.

Organisers are optimistic that the extraordinary pyrotechnic displays will be the culmination of a string of successes and celebrations for the UAE, following Dubai’s recent World Expo 2020 win and the country’s commemoration of its 42nd National Day anniversary.

The show will start with an attempt to break the Guinness World Record for the ‘Largest Fireworks Display’, a  display choreographed across the whole of The Palm Jumeirah and the islands of The World. The World Record breaking attempt will cover a distance of over 99.4km of seafront and feature 450,000 colourful fireworks and a series of scenes designed exclusively for the show and set to a musical soundtrack designed for the event.

Visible from vantage points across Dubai, all hotels on The Palm Jumeirah will be hosting parties and events to celebrate their involvement in the world record attempt, demonstrating the appeal of The Palm Jumeirah as one of the region’s most exciting tourism destinations.

As the attempt concludes, a 15 minute display covering a one kilometre stretch of the Jumeirah beach will commence, with the Burj Al Arab, Madinat Jumeirah and Jumeirah Beach Hotel as the stunning backdrop.

While the attempt is taking place, in Downtown Dubai residents and visitors will be able to enjoy fireworks cascading down Burj Khalifa. The best locations to enjoy the fireworks include Burj Park, an island overlooking Burj Khalifa, set on Burj Lake or the Waterfront Promenade lining The Dubai Mall; Burj Plaza; the 3.5km Emaar Boulevard; and other areas in Downtown Dubai.

The shows, and the numerous other events that will take place across Dubai on the 31st, including a fireworks and water and light show at Dubai Festival City, will create a  spectacular and a memorable occasion for residents and visitors.

Helal Saeed Almarri, Director General of Dubai’s Department of Tourism and Commerce Marketing (DTCM), said: «The celebrations will mark the end of a momentous year for Dubai — a year which we will reflect on with pride and has laid the groundwork for a prosperous future. The highlight was winning the bid to host World Expo 2020, an event which will provide a unique platform on which to communicate the remarkable story of a young city and nation and allow us to positively shape global perceptions of the Arabian Gulf as a destination for both business and leisure. This was also a year when Dubai was named as a ‘Travellers Choice’ destination by Trip Advisor, an accolade that demonstrates our strong position amongst opinion formers in the travel industry, and a number of announcements regarding new hotels and billion dollar orders at the recent Dubai Airshow demonstrated the exciting years that lie ahead.

«The recent celebrations of the Expo win and the 42nd National Day have shown the ability of Dubai’s government and private sectors to come together and mark important occasions with creativity and style. The night of the 31st December will prove to be no different and once again images of our Emirate will be shown around the world as we look forward to a busy 2014 which starts with the Dubai Shopping Festival as the opening of a packed calendar of events. We look forward to a memorable night and to residents and visitors coming together to celebrate our Emirate.»

The Fireworks by Grucci has been commissioned to put in place the pyrotechnic designs for the attempt, creating an  and experience for viewers in Dubai and across the world.