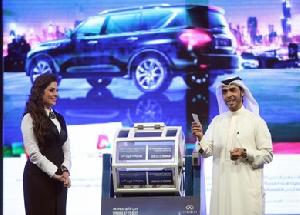 Dh1.7 billion is the total of all prizes offered during the Dubai Shopping Festival (DSF) since its first edition in 1996. The prizes since its inception includes Dh80.5 million in cash, 734 kilos of gold, 33 Rolls Royce cars, in addition to cars from Nissan, Lexus and Infiniti.

Under its "Shop at your Best’ banner, DSF 2014 offers even more promotions and prizes with the aim of offering extraordinary shopping experiences through the best deals and discounts of up to 75 % at 70 malls and over 6,000 shops combined with a line-up of over 150 events and activities spread throughout the city. This year, DSF shoppers have been given the opportunity to participate in a total of 177 raffle draws.

Infiniti Mega Raffle. DSF visitors who buy a raffle ticket for just AED 200 will get the dream opportunity take home daily not one but two luxury Infiniti cars — a QX60 and G25 and what’s more a cash prize of AED 100,000!

Nissan Grand Raffle. The Nissan Grand Raffle is giving away shoppers this DSF the chance to drive away with a Nissan car every day. Raffle coupons will be available at ENOC and EPPCO stations during DSF and can be obtained on a minimum purchase of AED 20 for all non-fuel purchases. The lucky winner can choose his prize from one of 14 Nissan models.

Gold Raffle. The Dubai Gold and Jewellery Group is offering DSF shoppers the chance to win a kilo of gold and a diamond Solitaire ring every day across the 32 days of the festival. Shoppers purchasing gold jewellery worth AED 500 or a Dubai Expo 2020 gold coin at any participating outlet in the city will be entitled to one raffle coupon that will be entered into the daily draws for one kilo gold and a diamond Solitaire ring.

Shop&Win is a brand new shopping promotion during DSF, offering one lucky shopper the chance to win a cash prize of AED 500,000. Against each spend of AED 200, the shopper earns a raffle coupon and automatic entry into a mega draw with the chance to win AED 500,000 cash on the final day of the promotion.

The Dubai Mall. Shoppers spending AED 300 at The Dubai Mall get a chance to win a Lamborghini Gallardo LP560-2, in addition to a number of unbeatable deals on a wide range of merchandise from well known regional and international brands.

Visa International. Use your Visa card from 1st January to 28th February 2014 during the Dubai Shopping Festival and you could win a trip to the 2014 FIFA World Cup Brazil.

The Festival accounts for between 25 — 30%of the annual retail sales. DSF’s 2012 edition managed to bring in 4.3 million visitors to the city who contributed towards a total spend of AED8.9 bn.

Within the first 60 seconds, Dubai fired enough shells to break the previous record, a  show of 77,282 fireworks displayed by Kuwait in November 2012.

Adjudicators for Guinness have been scouring the sites around the Palm and World Islands in the emirate trying to physically count and verify the final numbers for the record attempt, which had been in planning with 5,000 man hours to pull it off.

Talal Omar, a Guinness adjudicator, said: “This is an iconic record title that has been challenged and broken on a phenomenal scale by Dubai. I am pleased to confirm that Dubai has achieved a Guinness World Record title for the largest fireworks display.”

The show was spread over 95 kilometres of seafront with a team of more than 1,000 experts and 200 pyrotechnicians from the UAE and abroad.