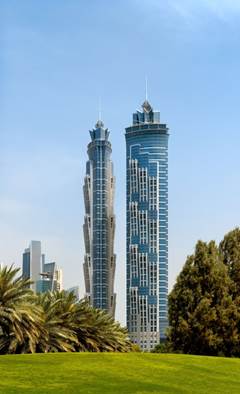 The second tower at JW Marriott Marquis Hotel Dubai, the world’s tallest hotel, is now open, with 294 new rooms bringing the total room count in the hotel to 1098.

There will also be two new food and beverage outlets in Tower 2, which is identical in design to Tower 1. The 72nd floor may be operated as a function space for hire.

Sofitel to open in Downtown Dubai

Sofitel Luxury Hotels has announced that its five-star flagship Middle East hotel, the Sofitel Dubai Downtown, will open on May 1, 2014.

he hotel’s 350 rooms showcase Op Art design, views of the Burj Khalifa and the coast. All rooms feature spacious marble bathrooms, deluxe French amenities such as Lanvin and Hermes along with Sofitel’s MyBed concept — an all-feather bed and extra light down duvet, free WI-FI and Nespresso coffee machine. The hotel has a large variety of rooms, including 76 suites with views of either Burj Khalifa or the coastline.

The various food and beverage options at the hotel will include Thai restaurant The Green Spices, and French eatery The Red Grill. The hotel also includes Les Cuisines for all-day international dining and the Lobby Patisserie.

Other facilities at the hotel will include So Spa and So Fit, which features a full range of fitness equipment, treatment rooms, two hammams with private baths, a scrub and deep relaxation room, dry sauna and steam room. The hotel’s 14 meeting rooms and ballroom can be used for business meetings or private events.

Leading malls in Dubai will give food enthusiasts the opportunity to experience diverse cuisines at their food court outlets, and the chance to win prizes. At The Dubai Mall, visitors can savour special set menus and offers customized for them by the dining outlets at the mall. Visitors spending Dh300 at The Dubai Mall will also get a chance to win Dh100,000 of fine dining experiences in Emaar Hospitality restaurants.

Deira City Centre, Mirdif City Centre and Mall of the Emirates will run a ‘Hi-Fi Flavours’ campaign in parallel to the festival, which allow shoppers and diners who spend Dh150 at any store to enter the weekly draw and win Dh 10,000 worth of dining vouchers. Receipts from any food outlet will be exchanged to two coupons giving diners double chances of winning. Draws are held every Tuesday evening, 7pm at each mall. The three malls will also offer families and children various entertainment activities:

Deira City Centre: The Singing Classic Waitress Comic: A  cabaret act from the UK featuring three girls from an outstanding vocal harmony group, performing songs from a vast range of eras, from the swinging classics of the Andrews Sisters, to the modern and funky beats of Girls Aloud! in their glamorous costumes and funny dance moves. The show is suitable for audience of all ages. Three shows daily (March 5th — March 11th, 2014). Kids’ Corner: A themed zone within the mall conducting various activities for children aged 4 to 11, teaching children the food pyramid, healthy eating habits through fun and practical games as well as creative activities. Classes and demos include art & craft, healthy food and habits, food design, creative menu and sandwiches, and a comic act (March 5th — March 11th, 2014). Jazz Musicians: A musical ensemble of two musicians will serenade customers during peak lunch and dinner hours over the weekend, creating a festive ambience and providing diners with jazzy blues in the background (February 24th — March 15th, 2014).

Mall of The Emirates: Food Flash Mob: Participants in chef’s attire will form a symphony of acts in a random manner. Dancers acting as chefs and servers will come from behind the food counters and begin a routine, all at the amazement of the mall visitors. A  show will be taking place at two venues within the mall — food court next to Magic Planet and food court next to Centre Point (March 7th — March 13th, 2014).

Mirdif City Centre: The Aerial Show. A  act that gives a new dimension to the environment in the food court. Ten aerial artists will sway, swirl and jump up in the air to the beats of the musical score to keep diners entertained while enjoying delectable food offerings from various outlets (March 9th — March 15th, 2014).

Chanel to Present Its New Collection in Dubai

Karl Lagerfeld will host the next Chanel cruise show in Dubai. The collection will be unveiled on 13 May.

According to Bruno Pavlovsky, President of Chanel Fashion, “Chanel is very pleased to present its collection in Dubai. In addition to being a key hub for our Fashion business in the Middle East, Dubai was chosen because it inspires travel and evokes the true spirit of Cruise.”

Dubai and luxury are nearly synonymous. In the Middle East, Dubai is the powerhouse, raking in almost half of the region’s market share of retail spending. But the city’s officials want more. They want Dubai to evolve into a hub of creativity that attracts the region’s best designers.

The first phase of construction on the 1.7 million-square-meter (18 million-square-foot) site will cost around $1 billion and be ready by 2015, said Amina Al Rustamani, CEO of Tecom Investments, which is developing D3.

She says the idea is to bring creative minds together under one umbrella.

“So the idea was like, OK, why can’t we create a SOHO destination for these designers to be in, one place where you have specific events and activities and promotion for tourists to come and see really what is special that Dubai could offer to them?” she said.