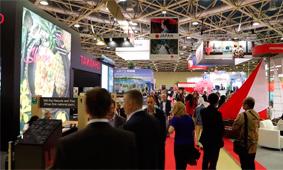 The 24th edition of OTDYKH Leisure, took place on  September 2018 at Expocentre Fairgrounds in Moscow. The event brought together 870 exhibitors from 41 countries and 44 Russian regions, covering the total area of 15 000 sq. m with over 38 300 visits during the 3 days of the Expo.

The key feature of OTDYKH 2018 edition was a significant increase of the Russian domestic travel exposition as well as the strong advertising campaigns of well-established exhibitors.

Traditionally strong participation was shown by Asia and Latin America. European countries intensified their marketing efforts to attract more tourists to their destinations.

Large and exclusive expositions were demonstrated by the top destinations such as Indonesia, Sri Lanka, Thailand, China, Georgia, Spain, Greece, Serbia, Bulgaria, Cyprus, Hungary, Cuba, Tunis, Egypt and many others.

A record number of Russian regions took part at the event to introduce their tourist attractions to the exhibition’s guests, increasing their exhibition are by 26% compared to 2017.

The exhibition was accompanied by a comprehensive business programme, featuring more than 40 business events in 11 conference halls with 200 speakers and over 2.000 participants including representatives of government authorities and travel industry. During the exhibition, 15 governmental agreements have been signed.

The highlights in the field of outbound tourism became a Hosted Buyers Programme 2018 and a series of roundtable meetings between Russian large tour operators and international authorities in total of 4 roundtable meetings dedicated to Serbia, India, Indonesia and Japan. The meetings were co-organized by ATOR (Association of Tour Operators of Russia).

The key event in the area of inbound tourism became the conference on the domestic tourism development in Russia. The so-called “All-Russia Meeting on Inbound and Domestic Tourism Development” was held on 11th of September and attracted over 200 participants incl. key decision-makers, governors, heads of tourism-related ministries and authorities.

The Ministry of Culture of Russian Federation, the Association of Russian Tour Operators, the Russian Union of Travel Industry, the Chamber of Commerce and Industry of the Russian Federation and other national and regional authorities have, once again, extended their support to OTDYKH, noting that the exhibition is well-established and high-demanded B2B platform.

Despite a very difficult year for the tourism industry, OTDYKH 2018 welcomed numerous newcomers as well as a series of returning exhibitors. Among newcomer were Palestine, Andhra Pradesh, Taiwan and Sintra as well as the Republic of Bashkortostan, Omsk and Penza regions. Maldives and Japan returned to the leading travel exhibition with collective stands after a short break.

The Dominican Republic with 200 sqm stand, twice as large as in 2017, became the official sponsor of the exhibition. The Ministry of Tourism of the Dominican Republic and its 13 co-exhibitors triumphed at the show with remarkable cultural and artistic programme including national music, traditional dances and culinary offerings. Visitors enjoyed interactive presentations of the country’s most attractive destinations, resorts, and various recreational opportunities of the Caribbean island. A new prise winner video “Me Gusta” was in particular highlighted by the OTDYKH team.

The National Tourism Organization of Japan (JNTO) became the partner country of OTDYKH 2018. Japan’s recently launched international tourism campaign, so-called “Enjoy my Japan” was introduce to Russian public during various events carried out at the exhibition. The cornerstone of the campaign is a goal to make tourists familiar with little-known attractions, activities and cuisine of the country.

Among the events held by JNTO were the culinary workshops, tea ceremony within the Food& Wine Tourism Conference, the roundtable meeting with Russian tour operators as well as the press conference with the participation of Jun Takasin, Deputy Head of the Tourism Agency of Japan and Valentin Shestak, Russian market Coordinator of JNTO. Roundtable discussions between the two countries resulted in meaningful face-to-face communications covering a wider range of topics, from charter flights and simplification of tourist visa procedures for Russian citizens to the possibility of handling the itinerary for large tour groups to Japan.

The beautifully designed stand of Palestine organized by the Ministry of Palestine welcomed numerous co-exhibitors including tour operators, hotel chains and national associations. International travel experts had an opportunity to get first-hand information about the tourist attractions of Palestine, which are still little known in Russia. Mr. Jiries J. Qumsiyeh, Dir. Of Minister’s office of Palestine, noted “we are participating at this exhibition for the first time. This exhibition was very fruitful for us, it was one of the best exhibition we have ever participated in Russia”.

The stand of another newcomer, Taiwan, presented by the group of companies, was popular all days of the exhibition, offering to the visitors entertaining quizzes, video presentations as well as degustation of national dishes and tea, which is considered one of the best in the world. Great interest among representatives of the Russian tourism industry has caused the news about the temporary cancellation of the visa regime. According to the innovation, the Russians will be able to stay in Taiwan without a visa for up to 14 days.

Numerous Russian regions, 44 in total, participated in OTDYKH 2018 edition. The extended exposition were demonstrated by the Republic of Tatarstan, the Republic of Komi, the Kaliningrad, Perm and Vologda regions. The highlight became a video contest “Russia — my Motherland!”, capturing top travel destinations across Russia. The completion featured 62 artworks from 28 Russian regions and was supported by the 1st Russian Channel.

This year Vologda, with its impressive must-see attractions, became the partner region of OTDYKH. The Department of Culture and Tourism of the region presented opportunities for cultural, educational, spa, children’s, rural, culinary and other types of tourism.

The European exhibitors for example Georgia, Spain, Greece, Serbia, Bulgaria and Cyprus arrived to OTDYKH 2018 with collective pavilions. Thanks to a rich history, culture, heritage, architecture and cuisine, the European countries continue to market themselves successfully as year-round destinations with the tourism offerings that suites different tastes, culture and budget.

The long haul and exotic destinations, with traditionally strong participation at OTDYKH, such as Cuba, Indonesia, Sri Lanka, China, Thailand, Egypt, Tunisia, and India, showed an outstanding participation with an intensive advertising campaign, choosing once again this event as an annual platform to meet business partners and to promote new products and services to the lucrative Russian outbound travel market.

The Ministry of Indonesia discussed its promotional campaign including “10 new Bali” and initiatives to support charter flight programs during the roundtable meeting with Russian tour operator. According to Mr. Wahid Supriyadi, the Indonesian Ambassador in Moscow, Russian airline, the subsidiary of Aeroflot will soon launch direct flights to Bali, which will help to increase the tourist flow and make Indonesia more accessible for Russian tourists.

Once again, India participated at OTDYKH with outstanding exposition and a record-breaking number of companies. It was represented by the collective stands of India Tourism and by regional stands of Kerala, Andhra Pradesh, Goa and Indian Railway Catering and Tourism Corporation. The highlight became the roundtable meeting on promotion of tourism industry in India. The discussions were carried out on 12th of September by ATORs’(Association of Tour Operators of Russia) professional moderates.

The meeting brought together the representatives of the Ministry of Tourism of India, Department of Tourism of Government of Goa and large Russian tour operators including ANEX Tour, JET TRAVEL, ACTI Tour Russia, Avia Centre, PAKS and others. During the meeting Mr. Anoop Biswas, the representative of India Tourism office, has announced the Ministry’s plan to open a new overseas office in Moscow in 2019. Mr. Biswas communicated that the office, on one hand will become the main information source for Russian tourists, on the other hand it will serve as a main B2B platform for working with Russian tour operators.

The OTDYKH business programme was of great interest among experts, industry associations and companies actively engaged in the Russian tourism industry and covered a large number of events including conferences, seminars, work-shops, case-study presentations, roundtable meetings and other networking events. The business programme reflected the major industry trends and combined all relevant sectors of the tourism value chain, from MICE and Luxury Travel to Health and Gastronomy.

One of the key events of OTDYKH Leisure 2018 became the Conference on domestic and inbound tourism development in Russia, which was held on 11th of September. The outcome of the Conference became a draft resolution with practical proposals for tourism development in Russia. The resolution will be submitted to the tourism-related ministers for their consideration and approval.

The 7th International Travel Technology Conference featured both panel decisions and practical seminars during which companies had an opportunity to present their latest innovations. The conference was attended by over 300 delegates.

The 3rd Academy of hospitality business “Hotel today and tomorrow”, organized by Euroexpo, Russian Hotel Association and the Federation of Restaurateurs and Hoteliers of Russia, covered many relevant topics facing the hospitality industry today, including logistic, legislation, investment and taxation.

Last but not least, food and wine has been a growing demand within the tourist market in recent years. An increasing number of Russian travellers are searching for new culinary destinations, wine-testing holidays and exotic food experiences. Thus, the 3rd International Food & Wine Tourism Conference “Tasteful Journey”, once again, became a big success. The Conference brought together leading experts in gastronomy tourism. Participants addressed the most burning topics including marketing strategies to promote Russian food & beverage products abroad, international practices of branding the country as a culinary destination as well as challenges &opportunities facing the global culinary tourism today.

In 2018 OTDYKH International Travel Market will celebrate its 25th anniversary. Don’t miss out the opportunity to enter one of the largest tourism markets in the world with over 20 million outbound travellers per year. Become part of OTDYKH 2018- where the world of travel is at home.

OTDYKH Leisure will be staged on  September 2019 in Expocentre Fairgrounds in Moscow, Russia.