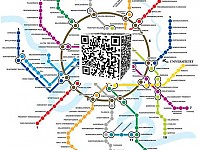 Moscow is planning to pursue development towards a navigation and data system that is fully integrated that would allow users to acquire information and guidance with regards to the great Russian Capital with the use of mobile phones throughout the entire city. A new system that is called the Urban Orientation Information System will cater information about the over ground and underground transport system, timetable displays, information monitors and road signs within Moscow. Also, these would all be made available in the English language.

This new system is actually going to make use of QR that would allow various users to obtain information through their smart phones as quoted by the deputy editor in chief of RIA Novosti, Ilya Ruderman who has mainly been conducting intensive research work for the said project. According to him, such solutions within the globe of the metropolitan medium worked successfully in several cities throughout the world. He also mentioned that any user would be able to make us of his mobile in order to read a particular code to get instant access to  online info on just about any entity within the city. This new system will allow every visitor in the city to acquire relevant information about various historic buildings, gain access archived photos, concert listings, transport information, theatres and cinemas, as well as exhibitions.

The desire for high end gadgets is definitely growing quickly and this new system will soon enough become accessible to a lot of people which would include not only residents, but also timely visitors according to Sergei Kapkov who is the head of the Culture Department of Moscow. He also anticipates that it will still be used by only five percent of the population and will go all the way to ninety percent along the days that will come.