According to the Russian Statistics, the first quarter of 2012 indicated the inbound tourist flow by 23%. Russians traveled abroad 2776.6 times. The results for 2011 were meager: the departures grew only by 7.5%. The first quarter of 2010 was slightly better — 12% growth. The beginning of this year could have been called promising, unless we knew the revenues of the tour operators were not increasing.

After righting a wrong, Egypt tops the list with the increase of 100.8% after two years break: 404.8 thousand trips. But, as you can see, it didn’t reach the level of the first quarter of 2010 (577.5 thousand) yet. It will be recalled that in  2011 Egypttook the fourth place among the most popular destinations.

Thailand ranks the second with the increase of 13% and counts to 337.3 trips. For the first time last year the country ranked the first place according to the quarter results, but it took only fourth place in 2010 if compared to the same period.

Having lost 4.4% (268.4 thousand), China takes the third place. In the first quarter of the last year the country gained 15.8%. Such rate reduction could have been caused by strategic error. The statistics could have been spoiled by the events of 2011 when unexpectedly quotas on visa document submission for the accredited tour operators were reduced from 100 to 30 passports a day. Besides, the travel agencies were placed in one same queue with other applicants. Altogether it was inconvenient to work with thedestination.

What concerns winter destinations, Vietnam has the most significant growth in the first quarter — 101.6%; its dynamics is twice as more if compared to the same period in 2011 (49%). Unquestionably, the direct flights from such regions as Novosibirsk, Krasnoyarsk,Kemerovo and Irkutsk favored such results. But the country is still on the 19th place — 49 thousand trips.

Another victim of Arabian Spring, Tunisia, shows good dynamics — it gained 100% and amounted to two thousand trips. By the way it’s even more than in the first quarter of  2010 with 1.6 thousand trips.

The rates of United Arab Emirates reached 47% which is more than for the first quarter of 2011 (37%), first of all, due to increasing the number of flights from regions to Dubai. But we should not forget that UAE is not only Dubai. Little by little Russians start traveling to Sharjah, Fujairah, Abu Dhabi and yet unpopular Ras .

Let’s note a ten per cent growth to Japan — 4.4 thousand trips. It counted up to 5.5 thousands in the successful first quarter of 2010.

Greece turned out to be the most active among European countries: 50% more. It’s interesting that Greece almost didn’t show any growth in winter 2011 if compared to the same period of 2010. It seems Greece also got a piece of Egypt’s Cake. Actively promoted winter buy- tours, along with damping, has played its part for the destination.

In general, European destinations grew and mostly due to  Schengen visas issued by Consulates in Russia. Only Finlanddecreased 14.5% and the reasons are . In principle, the destination should be growing as the citizens of St. Petersburg, its region and the have visas. But it’s not a surprise that the Finnish statistics shows strictly antipodal data for the first quarter.

Several words about outsiders: Turkey lost 10%, but it’s the rate of Righting A Wrong — tourists come back to Egypt and Turkeygets back its average winter demand. Thought, in the first quarter of 2011 the country has increased not by 10%, but by almost 68%.

Indonesia has lost 8.7%. In the end of the last year and in the beginning of this year its dominant destination — Bali — went west and the tour operators reduced prices even for the New Year’s tours. Due to the bankrupt of CTS Company hundreds of tourists couldn’t travel to the Asia for the New Year. But miracles in our statistics are not excepted. For example, according to the Russian statistics, 13.6 thousand trips were made within the first quarter. And according to the Indonesian statistics more than 13 thousand Russians came to the country in January. 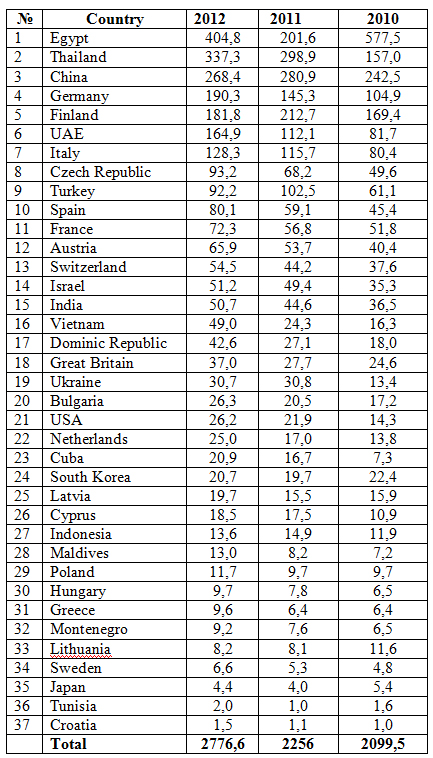