Serbia announces the statistic results of 2013 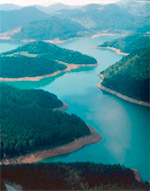 Serbia saw a 30% increase in tourist arrivals from Russia in 2013 comparing to the previous year. In 2013 a significant growth in Russian tourist flow showed the spa resorts: Vrnjacka Banja, Niska Banja, Soko Banja and others.

In 2013 there were 43,100 tourists from Russia, and 121,000 overnight stays, that is 22% more comparing with 2012. Tourists from accounted for the largest number of foreign tourists' overnights, followed by tourists from Montenegro, Slovenia, Germany, Russia, and Italy.

May, July and August were the most popular months for visiting Serbia in 2013.

«Basing on the results of the last years, we believe that we can set ambitious but achievable goals on strengthening our position in the Russian travel market and increasing tourist traffic from Russia to 200,000–300,000 tourists a year», — said Slavenko Terzic, the Ambassador of Serbia to the Russian Federation.

Tourism in Serbia shows rapid development. Hospitality, ski resorts and spa centres are among the priorities for investments in Serbia.