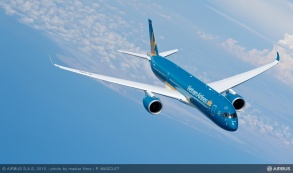 Vietnam Airlines has confirmed that it will commence the operation of daily non-stop services between Heathrow and Vietnam from June 23rd, 2016, adding a new Thursday flight to Hanoi to its existing six flights per week schedule.

The flights are carefully scheduled to offer convenient overnight journeys in both directions, and excellent onward connections via its comprehensive network of over 40 destinations in Asia, including 23 within Vietnam and Indochina as well as China, Japan and Taiwan.

As the national flag carrier of Vietnam, headquartered in Hanoi, Vietnam Airlines operates 94 routes to 21 domestic and 29 international destinations with more than 360 flights daily.

Operating a young fleet, mainly comprising Boeing 777s, Airbus A330s and Airbus A321s, the airline is expanding its fleet with next-generation aircraft such as Boeing 787 Dreamliners and Airbus A350-900 XWBs.