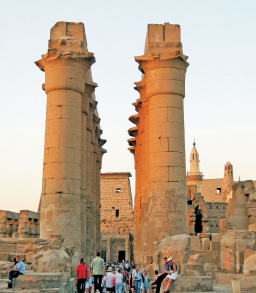 Luxor was named the world tourism capital for 2016 by the UNWTO.

In the five years since Egypt’s Arab Spring uprising, the country’s tourism industry has been riding a roller coaster of promising developments followed by discouraging setbacks.

This month was yet another example of that trend.

On May 19, just one week after the United Nations World Tourism Organization (UNWTO) had named Luxor the world tourism capital for 2016, an EgyptAir flight en route from Paris to Cairo crashed into the Mediterranean Sea, killing all 66 people on board.

An investigation is still underway as to the cause of the crash, and theories include everything from terrorism to pilot error to technical problems, but the crash occurred just as Egypt was poised for yet another potential recovery.

“We [have] had the best year since 2011, not at the levels of 2010 or earlier, but certainly the trend is more bookings for our Egypt programs,” said Ronen Paldi, president of Ya’lla Tours USA.

Paldi said that while some clients have called and asked about the EgyptAir crash, Ya’lla has responded that EgyptAir isn’t any more dangerous than other airlines and that the EgyptAir domestic flights the tour operator books tend to run without any interruptions. Ya’lla does not book EgyptAir for international flights into and out of Egypt.

Despite the crash, customers have been making “bookings for Egypt for late 2016 and 2017 almost every day, including on Thursday and Friday of last week when the news about the crash [emerged],” Paldi said, adding that he expects 2017 business to Egypt to top 2016.

Prior to the crash, there were several encouraging signs for Egypt’s tourism industry, including the UNWTO’s decision in May for Luxor to host its 104th session from Oct. 30 through Nov. 1. The confab is expected to draw some much-needed positive media attention to the historical Egyptian city.

Badr added that there are other developments in Egypt that point to progress. On the political front, he said it’s an “exciting time” for the country under president Abdel Fattah el-Sisi, who was elected in 2014, and with a newly appointed parliament that convened at the end of 2015.

He also noted that the Grand Egyptian Museum, an ambitious project underway near the Giza pyramid complex, is slated to open in late 2017 or early 2018. It will house numerous ancient Egyptian artifacts, including those of the boy king Tutankhamun.

Moreover, renewed major hotel investments of late have included the Nile Ritz-Carlton, adjacent to Tahrir Square and the Egyptian Museum, which opened in October; a new Royal Maxim Palace Kempinski hotel that recently opened near the Cairo Airport; and last year’s news that Marriott is taking over the management of the well-known Mena House Hotel, which overlooks the Giza pyramids.

“The support of such an influential United Nations body inviting the world to Egypt marks the start of a great opportunity for Egyptian tourism,” Rashed said.

Given all the positive developments, Badr said the outlook for travel to Egypt this year has been improving compared with the last three years.

“But our goal is to return to the numbers of visitors we welcomed in 2010,” he said. “We have a long way to go, but I am confident that Egypt is on the path to recovery.”

Asked whether the EgyptAir crash could dampen the upward momentum, Badr said, “Naturally, we are concerned about the impact it may have on people considering travel to Egypt, especially when the factors behind the crash are not yet clear.”

But, he added, “An incident such as this raises questions no matter where in the world it happens, not just in Egypt.”